The Geology of the Wick Rocks Valley

In 1890, Professor C. Lloyd-Morgan (F.G.S., Assoc. R.S.M.) visited Golden Valley and made some interesting observations about the geology of the area. His findings, published in the Proceedings of the Bristol Naturalists Society, are not only an excellent general overview of the geology at Wick Golden Valley LNR, but an intriguing insight into the history of the site.

See the main geology section for a full glossary of the geological terms contained here.

The picturesque little valley near Wick, through which the little brook called the River Boyd flows, affords to the geologist an opportunity of examining an interesting little patch of Palaeozoic rocks. As the geology of this locality does not seem to be well understood, I propose to supply a few notes in illustration of the accompanying sketch map. 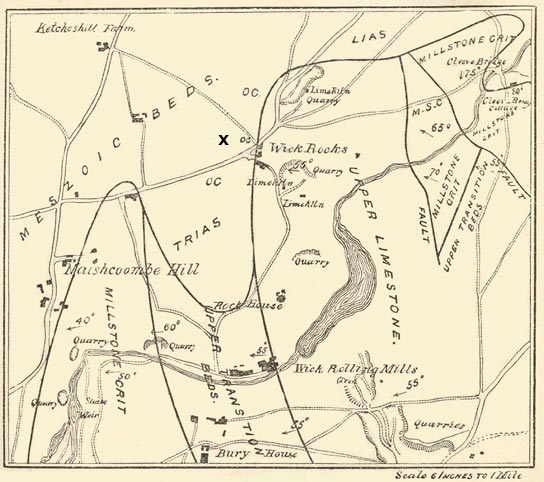 If we enter the valley at its lower end from the Marshfield road (lower left-hand corner in the map), we see some indications of the Basement Beds of the Trias, and then find ourselves in Millstone Grit. The beds are variable. There are fissile sandstones with mica; some strong close-grained light-coloured sandstones of great hardness and durability; shales and marly beds; a bed a few inches thick which gives an excellent tough clay, and several thin but well-marked seams of coal. Beyond some indications of carboniferous plant remains, I have found no fossils, except in one band some crinoidal ossicles. The dip is from 40° to 50° in a direction a little (5°-10°) to the South of West.

Just beyond, where the path crosses the stream, on the north side of the little bridge, are two quarries close together (at the point marked ? on the map). They should be examined carefully, since the incoming of calcareous conditions (i.e. the commencement of the Upper Transition Beds) are very clearly seen.

In the more westerly exposure in these quarries there is first a pebble bed, five feet thick, with milky quartz; then a foot and a half of fine close-grained grit; then another pebble bed also 1½ feet thick, followed by grits and marly shale. Between the two quarries, for they are adjacent to each other, there are 7½ feet of shale very carbonaceous, almost coal, below. Then follow twenty to twenty-five feet of solid grit, with strong pebble beds at base. These are succeeded by a bed with a curious irregularly mammillated surface. It is about one foot thick, very dense and solid, and effervesces with acid. This is the first bed with calcareous matter, and I think we may fairly regard it as the first bed of the Upper Transition series, the strong pebble bed being the base of the Millstone Grit. The calcareous bed yielded Mr. H. H. Winwood and myself two species of Lingula, one of which appears to be L. parallela.

Beneath this Lingula bed is a friable bed, from which the lime has been partially or completely removed by water, laden with carbonic acid soaking through. It is crowded with fossils, among which Producta (? species) is conspicuous, together with a bivalve (? Nucula). I hope to work out the fossils from these beds more fully. From this point onwards limestone bands, many of them richly fossiliferous, are the prevalent rock, though there are also shales and strong grit. They are the Upper Transition Beds.

I may next draw attention to the quarry just beyond the cottages, between them and the rolling mills, now used for grinding the ochre obtained from the Trias of the neighbourhood. Working from above downward, there are first about 35 feet of dark bluish-grey limestone, oolitic above, then highly bituminous. Cyathophyllum occurs here. This is followed by 2½ feet of grit, and then 14½ inches of red and grey marly slate. Then come twelve feet of strong dense grit, iron-stained along the joints, and this is followed by a thin coal-seam a foot or less in thickness. Beneath this is broken faulty-looking rock in which is an old adit 15 yards long – a bit of the “old men’s” work. A little lower down there are a few feet of thin carbonaceous and sandy beds with thin bedded grits. These are the last sandy or gritty beds visible. Near the dam for the mill strong oolitic limestones are found, with Cyathophyllum and Producta. They are clearly Upper Limestone. The junction of Upper Transition Beds and Upper Limestone may be placed at the mill. There is no sign of a fault.

The occurrence of the thin coal-seam in the Upper Transition Beds, within 50 or 60 feet at most of the Upper Limestone, is worthy of note.

The beds have a fairly uniform dip of 55°W. The thickness of the Upper Transition Beds may thus be estimated with approximate accuracy at 600 feet.

On either side of the pond, which is dammed back for the mill, there is solid limestone, which is being worked in large quarries on both sides of the stream along the strike of the beds.

If we follow on the right hand side of the valley, still working up stream, we can scarcely fail to notice at the point indicated on the map the sudden incoming again of the Millstone Grit. This is due to a fault which runs nearly North and South (N. 10° W. to S. 10° E.). The limestone seems to dip nearly due W. The faulted-in Millstone Grit N. 70° W. The fault is undoubtedly a reversed or thrust fault, since at the upper part of the northern slope of the valley the limestone is thrust further East than it is further down the slope.

The Millstone Grit thus introduced may be followed up the stream on the southern (right hand) slope of the valley and preserves a dip of 65° in the direction N. 70° W. It is followed in due succession by calcareous beds and well-marked sandy limestones, indicating the incoming of the Upper Transition Beds which retain the same dip to N. 70° W.

Suddenly, however, we come upon strong grits, with pebble beds of milky quartz with quite a different dip, viz., 75°-80° in the direction S. 10° W. These dips are not found in an isolated patch of rock, but are seen on both sides of the stream near Cleeve Bridge. The incoming of Millstone Grit again, and that with a dip in quite a different direction, can only be accounted for by a second fault, which, according to my estimate, runs N. 30° W. to S. 30° E.

Beyond Cleeve Bridge the Palaeozoic beds are covered by Trias.

The geologist, instead of retracing his steps down the valley, may take the little path from Cleeve Bridge to the Wick Rocks quarry, where he will see the Upper Limestone (in which there are strings and veinlets of Galena) well exposed.

At the points marked o c on the map, pits are being sunk in the Trias for ochre, which is being ground by Mr. Phipps at the Wick rolling mills. At the point on the map marked X, for example, a bed of brown ochreous rock four feet thick was (21st June, 1890) being worked. It was about eight feet from the surface, and overlain by red (and green) marls, being underlain again by red marls.

These illustrations are of fossils that Professor Morgan found in his time at Wick. Click on the small pictures to open the full sized version in a new window.

Many thanks to the Bristol Naturalists Society for permission to use this article and associated illustrations. Back Issues of all the BNS Proceedings can be obtained - contact them through their website.

For more information on Geology in the former Avon area, find out about the Avon RIGS Group through the links page.