The Geology of the Golden Valley Local Nature Reserve

The rocks in the Golden Valley LNR are known as Carboniferous Limestones. For many years the rocks here have been quarried and used for roadstone.

Over 300 million years ago during the Carboniferous period, an ancient sea covered this area and much of the UK. We know from studies of present day environments that the majority of limestones are deposited in clear, warm tropical seas. So at some time in the distant past a landmass occupying this area was inundated by rising sea levels and it was in these seas that the limestones of Wick were laid down. Towards the end of the Carboniferous period conditions changed dramatically to low lying swampy land covered by dense tropical rainforests. As rotting debris from these rain forests accumulated over many thousands of years and was buried under subsequent layers – it turned to coal. Over many millions of years these rock layers, including the coal-bearing rocks, have been disturbed by earth movements, which have crumpled and folded the layers.

To discover a little more about the rocks under this area east of Bristol, imagine cutting a deep slice through the Earth in a roughly east/west direction. Then look at this slice from say, the south (see the picture below); what we then see in simplified terms is a section through a huge bowl-shaped structure forced into this shape by the formidable movements of the Earth’s crust. This technically is called a syncline but you welcome to just think of it as a giant bowl! The rocks on the outside of the bowl are older than the rocks on the inside (it’s just the way they got folded). 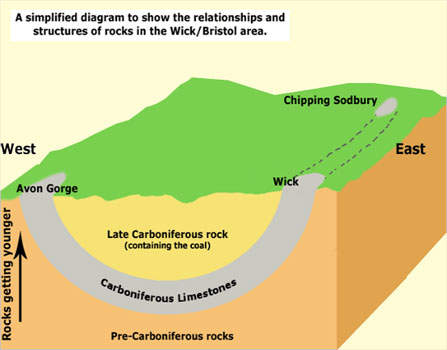 Have you ever noticed those almost vertical lines in the quarry faces? Well, when they were laid down millions of years ago they would have been the horizontal layers of sedimentary rocks. Compressional forces have squeezed them into an upright position. Over the millennia the overlying rocks have been worn away and in places the limestone has been exposed at the surface (the same series of rocks occur in the Avon Gorge and also at Chipping Sodbury). Of course nature is not very tidy so in reality it is very much more variable than this simple structure that we have concocted, but it is essentially what has happened.

Let’s get back to those rising seas! This was a warm tropical sea with a variety of different environments – from the calm shallows of salty lagoons to constantly moving tidal shoals and out into deeper open water conditions. How do we know all this? Through the careful study of these and other locally similar rocks, geologists have shed some light on their formation and composition. One excellent clue to be found in rocks are fossils. A lot can be learnt about the prevailing conditions from the types of creatures that lived (and died) at the time. Different organisms favour certain surroundings and the remains of these creatures, the fossils, provide us with many clues about past environments.

The rocks at Wick contain the fossilized remains of a variety of organisms. Let’s start with some of the more simple ones!

Stromatolites
Stromatolites are slow growing, mat-forming algae that grow slowly, layer upon layer and can, in the right conditions create substantial structures. Being a mat-forming algae might not sound like much of a life but stromatolites are one of the planet's most enduring inhabitants. They have eeked out a living that has enabled them to grace the planet for well over 300 million years - pretty impressive when you consider modern humans have been here for just a couple of hundred thousand years! Stromatolites generally prefer the conditions found in high-salinity lagoons and, whilst not common, can still be found in a few modern day tropical locations. Although they do become fossilised they aren’t the most obvious or easy to find. These conditions preferred by the Stromatolites changed as the water levels varied and a new set of residents moved in to fill these new environments.

Amongst these new residents are echinoids, brachiopods, and corals. These more familiar creatures would have favoured more open water conditions similar to the reefs of today.

Let’s start with the echinoids. One of the commonest echinoids were animals called crinoids, which are close relatives of the starfish and can still be found today. These creatures look somewhat similar to plants. They have a long stem with an array of fringed arms at the top. They are filter feeders and use their feathery arms to capture minute particles of food from the water as it drifts by. Crinoids have a skeleton made up of lots of very small calcium plates and rings. When the creature dies, these collapsed skeletons fall to the sea floor and eventually become fossilised within the rock.

Brachiopods are similar to shellfish. They possess two shells which are hinged and the majority of them fixed themselves to the sea floor and fed by filtering nutrients from the water. The hard shells are often fossilised.

We are all familiar with corals. Although the corals which inhabit the reefs of today differ from the fossilised ones found in our rocks, their habit and their mode of life is very much the same.

Earlier we mentioned tidal shoals. Oolitic limestone is formed in tidal shoals and is composed of countless tiny calcite spheres (oolites) formed in the lime-rich seas. Sticky “lime-mud” adheres to tiny fragments of sediment and the constant back and forth motion of the tides produce the spherical shape. In time layers of these become compacted and “glued” together forming Oolitic limestone.