There's plenty to be done at Wick Golden Valley LNR, and a lot of the management work is carried out by volunteers. Here are a couple of examples of the activities you can get involved in.

The working party meets on the second Monday of every month up to February. Volunteers always welcome – tools are provided. Please ring Ken on 0117 9089670 for further details. 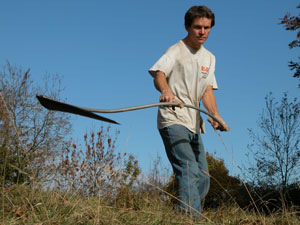 Cutting the grassland in line with the management plan is important in order to maintain the special plant species that grow here. The calcareous grassland near Raven's Rock and the grassland set between the two arches are both managed to prevent the establishment of a rank sward.

The grassland cutting takes place in late summer after all the wild flowers in the meadow have had a chance to set seed. The cutting is performed using hand scythes, with a different part of the grassland cut every year, achieving a mosaic pattern that helps to maintain the diversity of the grassland plants.

After cutting, the cut grass is raked up and deposited elsewhere around the site. This encourages any seeds in the cuttings to establish in new places and further enhance the diversity of the reserve.

The grassland cutting is performed by volunteers from the Friends of Golden Valley and also the British Trust for Conservation Volunteers (BTCV). 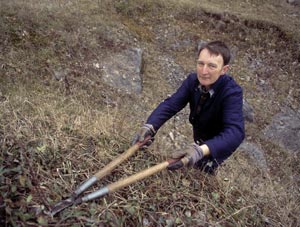 Clearance of scrub from grassland and copse areas also takes place in rotation, in line with the management plan. The two main areas of scrub clearance are at Raven's Rock and the valley bottom (the site of the old Ochre Works).

Scrub is cleared to keep paths clear and the landscape fairly open and also to prevent it out-competing rarer plants. The work is performed using hand tools such as shears, clippers, loppers and saws and is carried out by volunteers from the Friends of Golden Valley and the British Trust for Conservation Volunteers (BTCV).