Wick Golden Valley Local Nature Reserve (LNR) has a management plan that was written in 2003 and is designed to guide how the reserve is managed until 2008. The plan sets out many practical conservation measures, many of which have already been carried out or are underway and ongoing.

Aspects of the Management Plan

Some of the completed and ongoing aims and objectives of the Management Plan are shown below.

The creation of the Red Ochre Trail and Raven's Rock Trail have fulfilled this requirement of the Management Plan. The Red Ochre Trail is highly accessible, whilst the Raven's Rock Trail is more of a challenge, with steep slopes in places. The two trails cover all the major points of interest in the reserve and are detailed on the general map of the site and the Wick Golden Valley leaflet.

The plan states that 'Grassland areas should be managed to maintain species diversity by reducing scrub encroachment and the establishment of a rank, nutrient enriched, species poor sward'.

Limestone grassland such as that found near Raven's Rock is a nationally important habitat and is quite susceptible to change. It is therefore very important that this habitat is managed correctly. This means removing scrub (eg: tree saplings, bramble, hawthorn) that may start to grow on the grassland, or encroach from the edges. This is necessary because the important grassland species will otherwise become shaded by the scrub and will have to compete for light and nutrients - the scrub always wins this competition and eventually the grassland species will be lost.

The other item of importance is ensuring that the grassland does not become 'nutrient enriched'. Many fields in the wider countryside that used to support a myriad of wild flowers and other interesting plants are now 'species-poor' because they have been nutrient enriched through the application of artificial fertiliser. This means much more grass for the farmer to make into hay or silage, but unfortunately much fewer of the special plants that used to grow.

Of course, no fertiliser is going to be spread over the grassland at Wick Golden Valley, but there are other sources of nutrients that can be every bit as damaging. It is important that dog walkers clear up after their pets, not just for reasons of health and unsightliness, but also because of the nutrients that can be introduced to the soil. If ignored, over time more dominant species will appear that can take advantage of the added nutrients, and the important grassland plant communities will be degraded and eventually lost.

The management plan specifies the installation of 'nest boxes for birds and bats in suitable locations' where 'natural features are absent'.

Recently some more sturdy nesting boxes have been installed to complement the wooden ones. The boxes are all numbered (as you can see from the picture on the right) which is an aid in monitoring the bird and bat populations that are using them.

Bats are observed and monitored by qualified and licensed professionals. 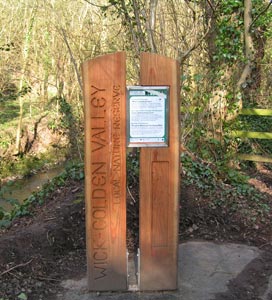 Other points in the Management Plan

Amongst other points in the plan were the establishment of formal access points to the LNR; these have been established and promoted through the Wick Golden Valley LNR leaflet and the erection of entrance signs, as shown to the right.

The plan also calls for ecological survey results to be sent to Bristol Regional Environmental Records Centre (BRERC) so that ecological information about the site can be properly managed and interpreted. As well as information from regular surveys being passed to BRERC, there is also a pilot scheme called Conservation Counts, which encourages visitors to the LNR to record what they see on the site on a special form and send the results to BRERC.

It is hoped that this scheme, together with the resources available on this website, will ensure a steady flow of ecological information, which, in turn, can be used to monitor the biodiversity at Wick Golden Valley LNR.